The semantic memory concerns the knowledge of the world and language. Thanks to semantic memory we can remember, for example, the number of days in the week and what they are.

Semantic memory is involved in storing our knowledge about the world, it is our “mental encyclopedia”. It stores words, ideas and concepts. Semantic memory is a long-term memory, so once we have acquired knowledge, it can be retained for a long time.

This memory governs our relationship with the environment because it stores:

Our brain can process information stored in semantic memory. This allows us to make associations between our knowledge and to understand the world or to do more complex thinking. Here is an example of an automatic process we can have thanks to semantic memory:

Semantic memory is, in a way, the dictionary of our knowledge about the world, as opposed to episodic memory which deals with autobiographical facts or events, i.e. everything that concerns us.

Catherine Meyer tells us more in her book “Les nouveaux pays. What we know today about the human mind”.

What is the difference between semantic memory and episodic memory?

It was Endel Tulving who, in 1972, proposed to distinguish two types of memory:

To use an example that Tulving often quotes, we use our semantic memory when we say that Paris is the capital of France, and our episodic memory when we remember our trip to Paris, during the vacations, and the visit of the Eiffel Tower…

Today, most scientists have accepted the theory of episodic memory. After having suffered certain brain lesions, it happens that one is deprived of episodic memory: one can carry out new learning, one can thus make new memories, albeit with difficulty, but it is impossible to remember the origin of these learnings. This was the case with a patient who came to Tulving’s clinic for treatment. She was taught certain information, such as “the sun melts the asphalt”. At the end of the sessions, she was asked, “What does the sun melt?” and she replied, “Asphalt. But, when asked how she knew this, it was discovered that she had no idea how she had learned it.

Following an incident, a trauma or an illness, it is possible to have an alteration of the semantic memory. It is therefore possible to have difficulty learning new concepts or finding the right words.

Exercises to train and improve your semantic memory

Semantic memory is a cognitive function that can be improved throughout our lives. We can train it from a preventive point of view, but also to recover skills lost due to an illness.

Our games to work on semantic memory

In this game you have to read 4 words and find the intruder between them.

With this activity, you can stimulate the semantic memory because we have to understand the words and find their meaning. In addition, to find the intruder, you have to find an association between 3 of the words presented and find the category to which they belong. This game allows you to work on the meaning of a concept and the creation of mental schemes at the same time. 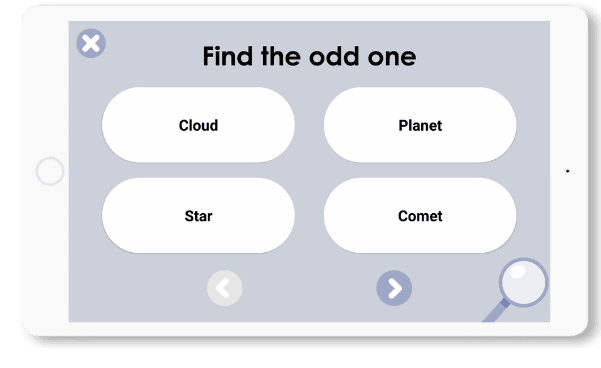 In this game, you have to answer general knowledge questions.

Thanks to this game, the person stimulates the search for knowledge. It is therefore necessary to work on the comprehension of words, but also to follow a pattern to find the right answer. If you don’t know the right answer, you can also use semantic memory to discard the wrong answers and find the right one, thanks to the logic of exclusion.