Autism and school difficulties: how to deal with them?

Autism causes a variety of disorders in children. Concerning schooling, children are abandoned to their fate because of school difficulties. However, there are things that parents can do about it. All about how to deal with their school problems.

Here is a presentation of autism, both by numbers and by the causes of its appearance.

Facts and figures about autism

Autism was discovered shortly before the end of World War II. It was discovered in 1943 by the psychiatrist Léo Kanner. Note that autism affects 0.7% of the world population. Know that 40 children out of 50 do not benefit from schooling. The cause: learning difficulties, cognitive problems, inappropriate techniques, etc. It is also important to note that only 10% of autistic children are cared for in accordance with their disability.

The causes of autism

The origins of autism are multiple. It is given a genetic origin. Environmental factors are causes of autism. First of all, the studies carried out incriminate the deficiencies at the level of nutrition. For example, they think of a deficiency in essential nutrients such as: iron, vitamins B9 and D. In addition to nutritional deficiencies, there are drug sources. These are mostly drugs swallowed by the mother-to-be during pregnancy. Paracetamol and antibiotics are likely to promote the development of autism.

Let’s mention the toxic products and pesticides that we encounter on a daily basis. They are as dangerous as food additives. In short! The factors responsible for autism are still far from being all identified. Researchers are still investigating.

Focus on the academic difficulties of children with autism

Children with autism are reportedly not attending school for many reasons.

The learning difficulties of a child with autism

A child with autism faces adjustment problems in the school setting. Autism Spectrum Disorders (ASD) affect a child’s ability to learn well in a school setting. This makes school a complicated place for the child with autism, provided that the setting is adapted to his or her disability. School is a place to learn new knowledge and skills. Learning to read and practicing writing are the daily tasks of teachers. A child with a learning disability will have difficulty keeping up. In addition, a child with autism would have a lower than normal IQ. As a result, he will have difficulty assimilating certain concepts.

It must be said that a child with autism spectrum disorder can learn. But he cannot do it in the same way as a “healthy” child. Therefore, it is ideal to place him in a school or center adapted to his needs. Programs that fit their situation are a priority. However, this is not always the case in a normal school environment. It is important to note that their way of learning is different from others.

For example, children with autism tend to learn by imitation or when they feel safe. All these reasons make their schooling difficult.

Of course, cognitive difficulties are also a barrier to schooling for children on the autism spectrum. An individual with a cognitive problem will have difficulty understanding what is being explained. Even this seems simple and obvious. This can be explained by several elements: a deficit, a lack of consistency, etc.

How can this be remedied for the happiness of the autistic child?

To date, there is no cure for autism in children. However, school-based care is possible.

Schooling in a specialized center

On the normal school curriculum seems difficult for all children with autism. With this in mind, parents can enroll each child in a facility that meets their learning abilities. We distinguish for example his schooling can be done in ULIS. This acronym translates to : Unité Localisée pour l’Inclusion Scolaire (Localized Unit for School Inclusion). Certainly, such a unit creates an event conducive to better learning for each child with autism. The objective is to allow children to attend school according to their situation.

Use the right teaching methods

In primary or secondary schools, classes are taught using certain pedagogical methods. The child with autism can be helped as long as the teaching techniques take into account his cognitive level. The experts praise in particular the pedagogical methods such as: the TEACCH method and the technique known as “ABA”. These are educational methods that put a smile on the face of every parent and toddler.

The first one of support on the structuring of the work of the children affected the autistic. This is why specialists call it “structured education”. The second method focuses on behavioral rehabilitation.

The use of communication systems

The communication difficulties of children with autism are well known. The very first manifestation of language occurs at the moment of birth. By the age of 1, a child is able to pronounce about 3 to 4 words. He can say 240 words from 2 years old. However, this performance in the field of communication is not observed in the autistic subject. He has a speech impediment.

Fortunately, specialists have developed tools to help with communication. They are based on signs or images.

Today, several communication tools are omnipresent in the home. Computer, tablet, smartphone… These are all smart devices that can be used to benefit children with disabilities. Not to mention the benefits of the Internet in terms of communication. In addition, a plethora of software has been developed to improve communication for autistic people. Parents should not worry about anything. There are safe ways to encourage the work of the child with autism.

COCO THINKS and COCO MOVES, an app to accompany autistic children in their schooling

Educational games to accompany autistic children from 1st to 5th grade with games adapted to work on all cognitive functions. 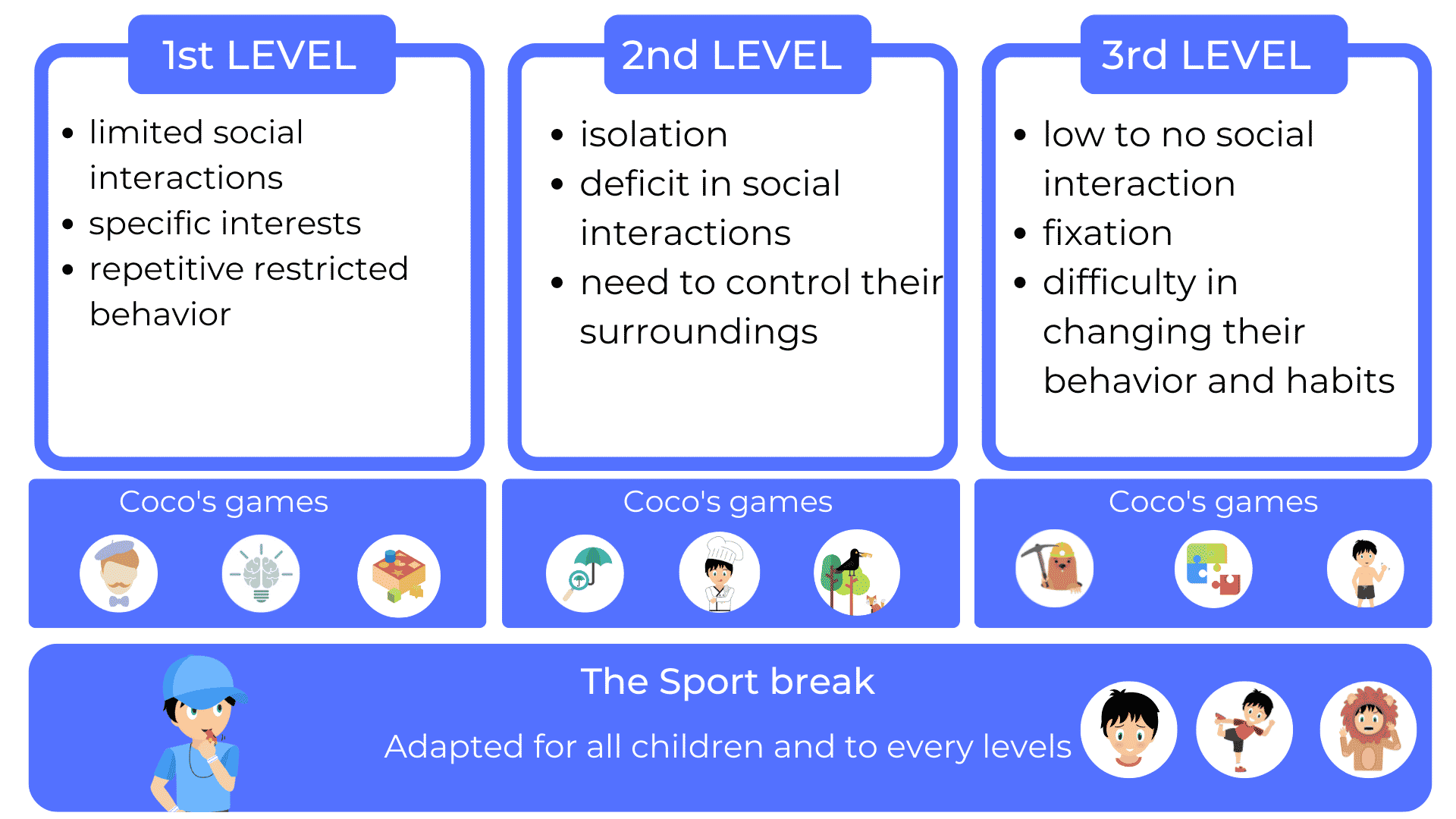 In our educational app COCO THINKS and COCO MOVES, you can also learn to recognize your emotions with the game “Mime an emotion”, in the Coco Moves part. By clicking on the question mark, you can learn to better recognize the different emotions.

This game to mime emotions is also accessible in the break, after every 15 minutes of screen. In fact, every 15 minutes, children are asked to choose a physical activity to take an active break when you can mime the emotions. 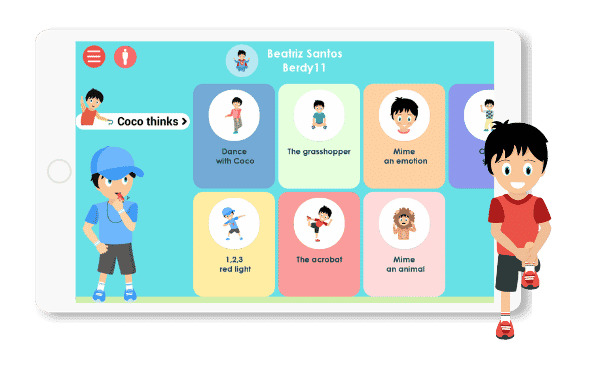 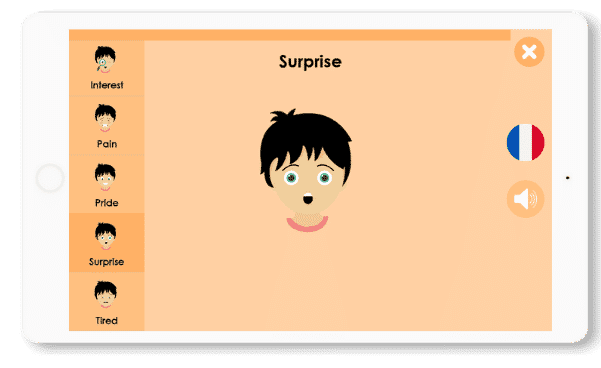 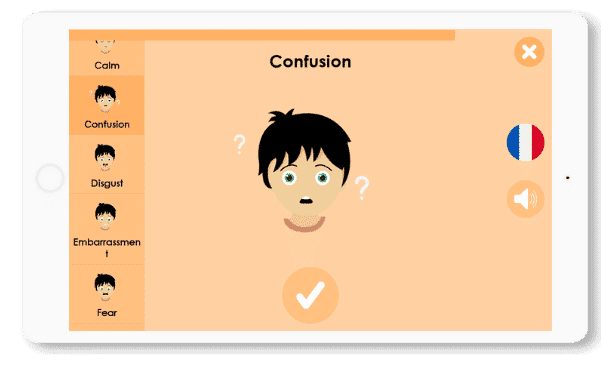 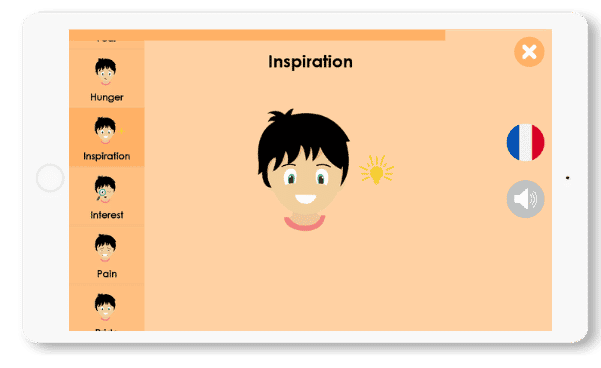 You are surprised when you are amazed at something, at a person or an object.

It is that feeling when you receive an unexpected gift. So in this situation, you have your eyes and mouth wide open and you cannot wait to open your gift.

When you are confused you are usually lost because of something that happened. You can even forget the name of a person or the name of an object.

To mimic confusion, you can frown your eyebrows, shrug your shoulders or even form a big ‘O’ with your mouth.

Inspiration is what happens when you imagine and create things just by thinking of it. Like when you are drawing, writing, or playing with your toys and making up stories.

When you’re feeling inspired you wrinkle your eyes, you scratch your head a little and you smile when the idea comes. 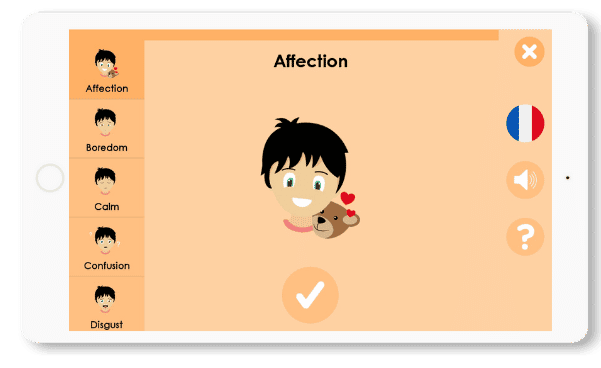 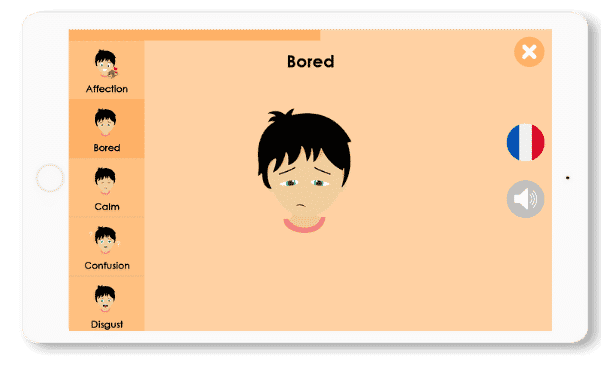 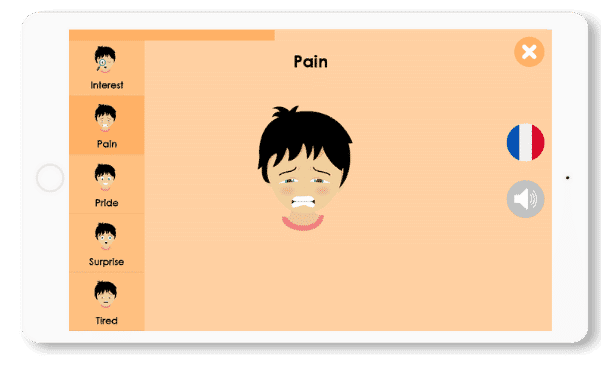 Affection is something you feel when you are moved by something, when you are thinking positive thoughts about a friend, a family member or a pet.

Here you can smile and think about good time. You can give a hug or kiss someone,  tell your classmate that you like them.

Boredom happens when you don’t care for what you are doing, you want to do something else like talking to your friends and not listen to the person in front of you.

You can blow really loudly and roll your eyes. You can also wiggle in your chair.

Pain is a feeling you don’t like, you usually feel it when you hurt yourself, and that is physical pain.

It can also be when you are missing someone or something very much.

To express pain, you can wrinkle your eyes and grit your teeth. You can also touch the part where you are hurt.

Invisible disability at school: between benevolence and support

by Suzie | All about Autism, parents Academy EN

Not all disabled people use wheelchairs. Some people may appear "flawless", yet they are classified as disabled. This...

Is my child dyslexic? Signs and support

Pronunciation defects are quite responsive. The child may confuse, for example, his and her dog. Another defect...

Is my child dyspraxic? Signs and support

Dyspraxia is a common disorder that affects an average of 6 out of 10 children. This figure only includes children...